LinkedIn's Francis Tsang on geolinguistic shifts and how a professional social media platform is localized so it speaks to people's language and culture all around the world.

Francis Tsang is Head of International Engineering at LinkedIn, crowning a long career in software and localization during which he has worked for companies such as Wang Laboratories, Apple, Adobe, Sun Microsystems, Macromedia and now LinkedIn. His major concern today is how to ship a specific product - a professional social media platform - to every member of the network around the world so that it connects with their language, culture, and need for relevancy.

As he says, this is what most international companies have on their agenda. But in the past, the big issue was speed to market; today it’s all about engagement: how can you optimize your product so that it delivers the most appropriate value to all your customers worldwide, and especially in the fast-growing Asian region?

Francis identifies three intermediate targets – the three Ps – in his role at LinkedIn.

1. Scaling the product, making sure it is as “world-ready” as possible, so anyone can use it anywhere.

2. Ensuring the platform that carries the product is fully functional. For example, offering the right search tool to handle all languages

3. Organizing your people around the world, by effectively distributing R&D internationally, while still contributing to the platform and all its products.

This involves a mix of vertical and horizontal responsibilities: vertical to deliver the appropriate global product at scale, by customizing and localizing the technology, and horizontal by working closely with peers around the world, questioning, influencing and learning from them to reach a consensus on priorities to optimize the product and platform. As he says, “these influencing and learning techniques are not something you pick up in school.”

To achieve this goal, Francis has a team of 150 with many horizontal teams inhouse for different products and engineering requirements internationally. With these resources, the team handles a LinkedIn worldwide user base of 650 million members. These divide into 45% for EU and Latin America and the remaining 55% are half in the USA and half in Asia.

Five years ago, the breakdown was different: 40% for the US, 40% for Europe and a much smaller number for Asia. Today there is an expansion in both the EU and the US, as well as in Latin America, and Asia is showing the fastest. So the top five single countries are the US, followed by India, which is growing very fast, and then China, which has been growing even faster than India in the last three years. Then comes Brazil, which is bigger than the UK. South East Asia is also growing fast. This means that the EU, Latin America , and Asia are all expanding, so “delivering on an effective engagement product is vital for all regions.”

LinkedIn started localizing its products around 2008, five years after the actual network was launched. At first, it was English only, and then three years later it went multilingual. The products are now translated into 23 languages.

What does LinkedIn Localize?

The product’s underlying purpose is to enable economic opportunities for all members, which means that people want to advance their careers. This involves getting the right job and building a meaningful relationship with your network by staying well-informed. Making meaningful connections is vital for all professional members, but cultural differences determine how this is done.

“In some regions, people can connect more openly than in others, and different techniques are used for this. In the EU people prefer to use email, but not in China. Other cultures prefer more face-to-face contact. This means that different parts of the product are used differently in different regions to achieve engagement. In addition, our marketplace offers jobs for members but it is also used by managers looking for candidates. And these behaviors differ around the world, making the whole process of localizing so fascinating.”

So the key question is: How much of the LinkedIn product do you need to localize to achieve this opportunity for engagement? “In most cases we ship the same basic product everywhere because what makes the product different is data and not simply the choice of functionality. So the economic graph (or member database) always stays the same and has everything in it. And we optimize some of the other data by serving them to different parts of the world. For example, our EU sites will not offer lots of jobs from the Philippines or India. So we try to optimize the content based on locations and languages so they are relevant to the job content in question. Sometimes we build two separate interfaces for our products in China.”

As is standard in such businesses, the LinkedIn language spread is a matter of user priorities and development time. Currently, for example, it relies on English for the community in India. “We will obviously be looking at more languages, especially as we go not just into new geographies, but also new segments of industry or business.” Francis’ team has grown fast in the last two years and language technology is now a key to their work. If members find comments that are not in their preferred language, there is a translate option for that update or comment. This is enabled by Microsoft’s translation technology, and people now expect “multilingual fluency” (a mix of languages) on their engagement sites.

For LinkedIn, the target is to enable conversation as a path to relevancy, not just offer a website content-reading facility. “We want to drive conversations among professionals, so we have to nurture communities. Multilingual conversation is now happening, and language technology is a fundamental part of our engagement network today. As a result, we are seeing a lot of new groups emerging to engage in their own language without worrying about other languages being used.

Looking back for Francis is also like looking forward. “In the early to mid-1980s, everyone used to build special software and products for each enterprise customer. Now we are doing it again! But the first time around, there was, of‌ ‌course, no concept of “customization.” Then, with the arrival of the internet in the 1990s, we started focusing on online content rather than on the tech products that carried it. By 2000, we were localizing applications: this was more about who you were and where you lived geographically. Today we are coming full circle as the most advanced products in the last three years have been moving towards much higher levels of personalization - almost like a single product for each person. Which is just as it was back in the 1980s for enterprises, except we do not need to actually build it especially for you!”

In the early localization industry, the growing need for relevancy and immediacy has meant managing people’s on-demand expectations: everything is instantaneous and I need it now. This stimulated the search for a new machine solution, and over the last 15 years, technology has developed to such an extent that machines can take over much of the basic work of translation.

“However, today what is most important is personal engagement, which impacts both the content and the user interface. The key issue in the localization industry is no longer turnaround time or cost per word but getting the content right for high-sensitivity situations. This need to address individual engagement with content now requires such skills as transcreation, rewriting and native authoring. LSPs, for example, are extending their offerings to video and authoring and offering specialized knowledge services. And then you need to synchronize the tech and that new content to be available to meet different language and regional needs. So we no longer need localization service hubs such as Dublin was in the earlier days. The technology has been democratized and the growth of platforms has created needs everywhere. So we have gradually come back to having users drive the experience, which will, in turn, spur new changes in the industry, and new investments and skills.”

Perhaps the one good thing about going full circle is that you do it better the second time around!

Francis Tsang delivered the keynote at the TAUS Asia Conference on 17-18 October 2019 in Singapore. To learn more about intelligent content delivery in and out of Asia, download the Keynotes Asia 2019! 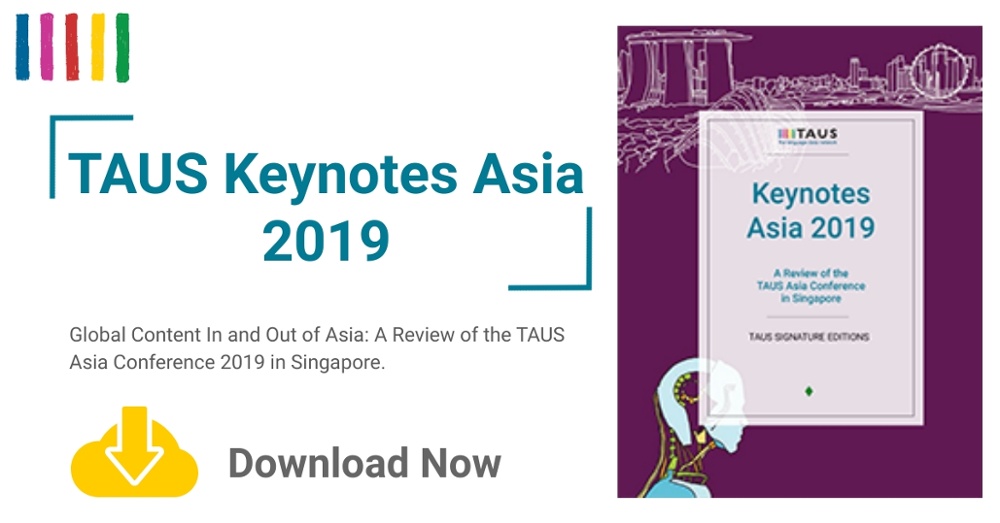