Pathways to Unicorn Status in the Translation Business

TAUS sat down with One Hour Translation and Travod, discussing the challenges of 21st-century translation. Here are some perspectives on what the most suited profile is to handle these challenges.

If we accept that scaling to a billion dollars in corporate revenue represents a major symbolic goal in the language service industries, let’s look at two possible and quite different this-century contenders. We recently talked to two highly successful “millennial” translation suppliers about their unicorn vision. Which profile seems most suited to the kinds of challenges TAUS has been identifying for the 21st-century translation ecosystem?

Travod International is a general service translation company with truly global ambitions. It was started in Moldavia in 2011 and is now based in the UK. The company claims that its mixed cultural background gives it a cutting edge. One reason being that the team works and engages with a young demographic that is highly ambitious about succeeding internationally.

One Hour Translation (OHT) is a major multiservice supplier that started business in 2008, now has offices in Europe, the US, Singapore, and Dubai, and has dared to sculpt the concept of rapid, technology-driven delivery into its very name.

Which profile seems most suited to the kinds of challenges TAUS has been identifying for 21st-century translation? And what are the chances for such companies to overcome the famous inherent “fragmentation” of the industry, so often cited as a brake on progress? And would achieving unicorn status presuppose certain growth decisions and strategies in the here and now?

These questions are meant to help us understand some of the problems typically associated with the famous “fragmentation” bottleneck in the industry. But it’s just possible that fragmentation is not a genuine problem, as thousands of mostly small companies manage to co-exist by each eating a small part of the translation & localization pie. 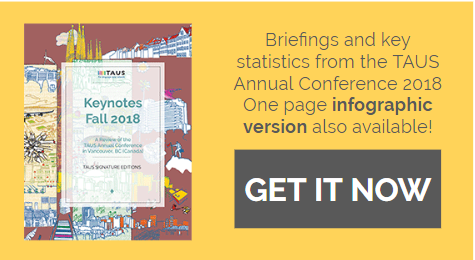 Ofer Shoshan (CEO of OHT) has already spoken up publicly about how best to build up a billion-dollar translation services company and even floated the project of building a consortium of existing LSPs (he calls it United Translation Agencies - UTA) into a broad-footprint conglomerate in which everyone could win. “The idea initially was to create a partnership of approximately forty LSPs, each with at least USD 7M in revenue and at least seven years on the road (7×7), although the sweet spot would be LSPs with USD 10-50M per year,” he wrote. They would remain partners, share resources and develop smooth work processes and payment systems in a cooperative approach he calls the “kibbutz method”. But so far, there have been very few takers.

Elena Grigoras and Sergiu Matei, Travod’s founders, are certainly ambitious about their company, which only went global five years ago and is now among the top EU players. For them, the issue is less about what the exact strategy should be to rise to the top and more about anticipating – and avoiding - the elephant in the room: “our main challenge is that Google will kick everyone out. So we need to find a way to see where the monster is coming in and make sure we challenge it,” says Elena.

They say Travod cannot compare with the “big guys” and that part of what makes them different is that “all our clients are millennials.” This means that within the industry ecosystem, their main concern is handling the conflict between what they call “ego networks and connected networks.” These connected millennials “don’t really think about money, they want to have more freedom and less restriction.” And Travod believes that this demographic will constitute tomorrow’s breakthrough: “it will come from outsiders who are not happy with the status quo.”

But it is not yet clear how this would lead to the creation of a unicorn from a relatively new player.

What about technology solutions in the race to the top? Ofer Shoshan does not wholly agree with the TAUS thesis that we need to fix things to make a radical move forward, particularly the “knowledge gap.” He explains that the 19th century Industrial Revolution was not a “fix” of something wrong, but a wave of new ideas and innovations. “What we need is a more radical framework. I believe that in five to ten years’ time, translation as such will be free. And we will look back and wonder why translation was once considered a problem.”

Ofer reckons that the businesses in the translation space that will survive will be either those that provide infrastructure to support the system underpinning translation, or those that provide a rich mix of services. This will mean that the vast majority of agencies focused on small, individual, standardized type translations will have a difficult time when it comes to the most common translation languages. Depending on market dynamics, he says, the market could reach a point where the technology-centric company that can deliver the fastest to market translations as part of a mix of services could take 3-4% of the market. And that makes one billion dollars! But the point is that, to achieve this, “people will need to be working for the technology system (and not the other way around).”

Elena has a different, though not unrelated take on the future. She says that “clients want handy things, not complex ecosystems.” This will mean that the industry will have to find a way to unlearn how it has built complex ecosystems and shift towards a world of minimalism and rationalization. The reason why it is hard for companies to scale up rapidly in the industry is due to the huge variety of localization/translation requirements for which there is never just one solution.”

This means that the only way companies can deliver complex products in the translation space, she says, is to “use a variety of subcontractors and connect with many dimensions simultaneously. Companies tend to specialize in one domain or another due to this complexity. And as a result, they can’t scale up quickly or offer single solutions to multiple problems. Connecting companies strategically to solve the multiplicity of customer problems could offer a solution for the demand side.” And possibly lead to the creation of a unicorn?

This is curiously similar to what Ofer Shoshan proposed with his billion-dollar UTA project. Maybe all these ideas need a little more time to penetrate the ecosystem…