We are so proud! TAUS Director Jaap van der Meer has been appointed as Honorary Professor of Beijing Language and Culture University for being a visionary and pioneer in the translation industry and inspiring many students with the articles and books he has written so far!

On Wednesday 21 March, 2018, TAUS Director Jaap van der Meer received the title of ‘Honorary Professor’ from the Beijing Language and Culture University for his outstanding achievements in the global translation industry. For this occasion he was invited to give a guest lecture to the students of Translation Studies Faculty of the Beijing Language and Culture University (BLCU).

BLCU has been an Academic Member of TAUS since 2015. Alex Han, professor at the university, established contacts with TAUS as early as 2008 when he was still a student, after he discovered the TAUS website and had read the articles and reports. “Jaap van der Meer is a pioneer and visionary in and for the global language service industry. The articles and books he has written as well as what he has contributed to the translation community over his many years in the industry have motivated the students of BLCU and will encourage them to live up to their true potential”, says Alex Han. He continues: “The appointment of Jaap as honorary professor will not only create new developmental opportunities for the translation and localization education of the university but also contributes to increasing BLCU’s social influence, recruiting high-end talents and promoting innovative capacity.”

Jaap’s lecture was centered around “Nunc Est Tempus”, the eBook that TAUS published in late December 2017. Jaap shared what we have learnt in the last two years since neural networks joined the stack of everyday language technology software. It emphasizes that now is the time (Nunc est Tempus!) to redesign our industry to meet current needs with a complete redesign of the workflow and job opportunities by redefining concepts in terms of the new realities. The core message of the speech was that translation is becoming an autonomous process - a feature on platforms - and can now be redefined as intelligent global content delivery. To introduce this shift in the industry, Jaap also shared an elaborate overview of the history of localization and machine translation.

Established in 1962, Beijing Language and Culture University is the only university in China focusing specifically on the teaching of Chinese as a second language to international students and the teaching of foreign languages to Chinese students. It is for this reason the university has been known as the “mini-United Nations”. 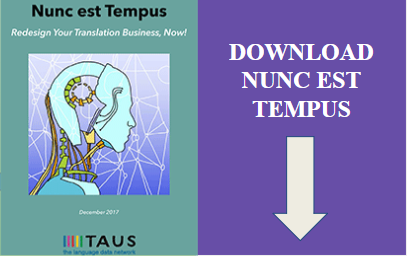 Anne-Maj van der Meer
Anne-Maj van der Meer is a marketing professional with over 10 years of experience in event organization and management. She has a BA in English Language and Culture from the University of Amsterdam and a specialization in Creative Writing from Harvard University. Before her position at TAUS, she was a teacher at primary schools in regular as well as special needs education. Anne-Maj started her career at TAUS in 2009 as the first TAUS employee where she became a jack of all trades, taking care of bookkeeping and accounting as well as creating and managing the website and customer services. For the past 5 years, she works in the capacity of Events Director, chief content editor and designer of publications. Anne-Maj has helped in the organization of more than 35 LocWorld conferences, where she takes care of the program for the TAUS track and hosts and moderates these sessions.