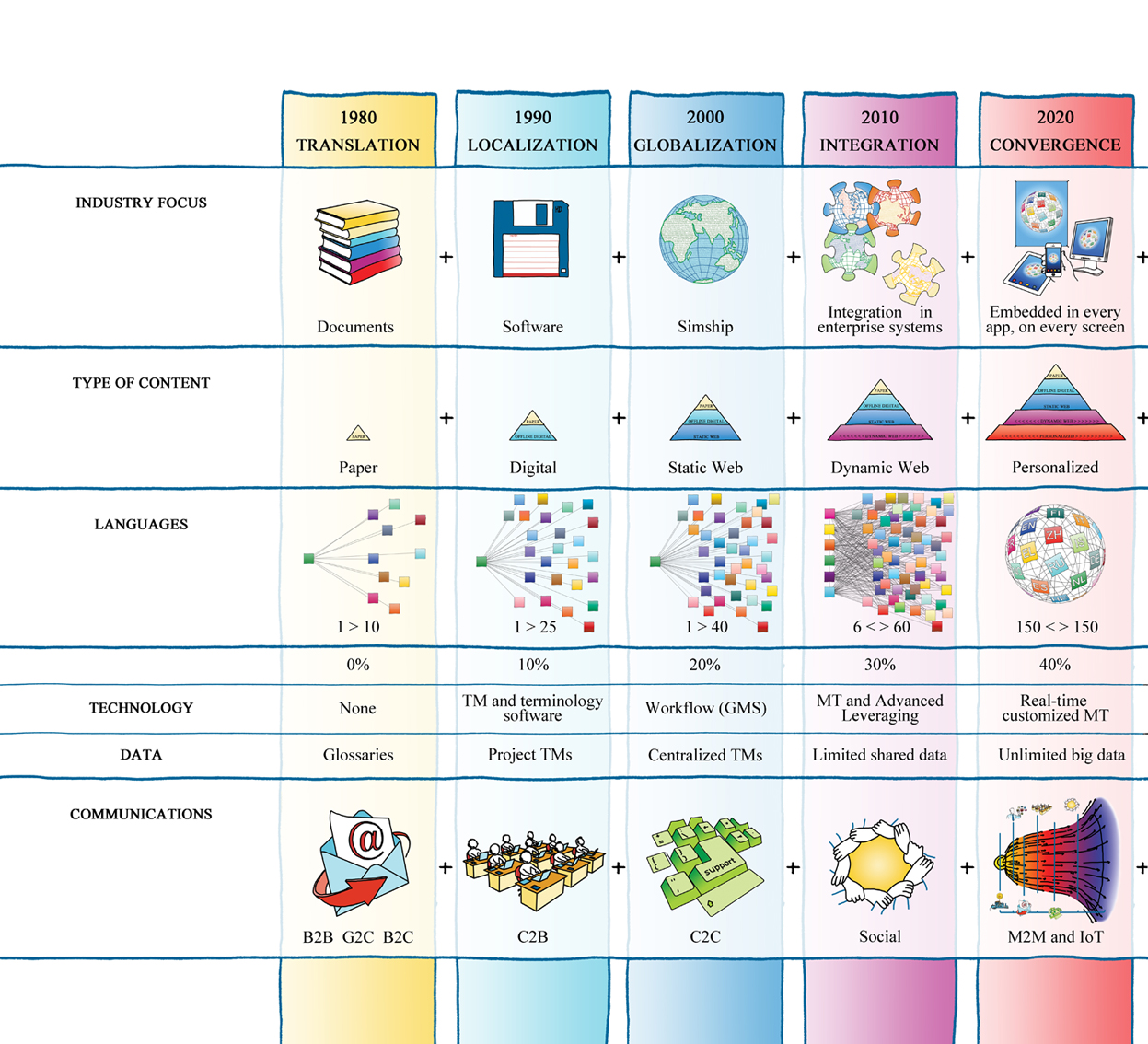 Game Changers of the localization industry need a new mindset. They need to be mission-driven and data-driven

The world can be overwhelming, so it’s tempting to try to make it smaller, more controllable. It’s the same with the world of localization. It’s overwhelming, so much content, so many languages. You would like to make it smaller, more manageable. I don’t want to make this a political debate, but I think we, localization professionals, know best that we cannot establish borders and keep them closed. The world is one. And in fact, if you think about it: our work is all about helping the world (and our customers) communicate better. Isn’t it great to work in a profession with such a noble ideology?

But how do we go about it? Who and what are the game changers? What is going to make our work in localization more manageable and controllable in 2016. Remember the TAUS think tank article of January 2013? We depicted the evolution of the translation industry down in five decades. (See picture.) We are now entering the Convergence Era.

In the Convergence Era translation is so embedded, it’s becoming almost invisible. Translation is on every screen, in every app: it’s everywhere. The vast majority of translated words is machine-generated, not even with human aid, and delivered real-time to the end-user. In fact most translation is ordered by the end-user, and not by the publisher or the owner of the content. In this user-driven environment it’s hard to determine or restrict the language coverage.

People (citizens, consumers) are all connected, and they are also connecting with billions of devices and soon with ‘things’. Translation shifts gears. It is changing from a luxury service, exclusive for global corporations, into a commodity service for 7 billion users who consider translation - most of the time - ‘free’.

It’s overwhelming. It’s tempting to try to hold on to the old ways of doing translation and localization, when everything was not so dynamic and always in flux. (See the picture above) But if you do, you know that you would be left behind and that opportunities will be lost. So we have to ask ourselves: how do we manage this change? How do we make sure that our limited budgets generate maximum impact for our companies?

One thing I want to make clear right away is that it’s not a question of using machine translation or not. It’s not that simple. We see it happening all the time. The pressure to translate more for less, and the omnipresence of ‘translate’ buttons on web pages, drives translation buyers and LSPs to use machine translation, coȗte que coȗte. They try it out and try really hard, and then often abandon it after a year.

If there is one thing we have learned in the past year, and in particular at the recent TAUS Annual Conference in Silicon Valley, it is that we need a new mindset. We need to be mission-driven and data-driven. If you want to watch out for the game changers in localization in 2016, or if you want to be one yourself, here is what you have to look for.

Francis Tsang of LinkedIn said it, and James Douglas of Microsoft said it too, and then many quoted them at and after the TAUS Annual Conference: “It’s not about translation, it’s about the user experience”. What they meant is that we, localization professionals, tend to put ourselves in the centre of everything. Our own standards and measurements dictate what we deliver and how we do it. We do things the way we learned them at school and the way we have been doing it for a long time, without asking ourselves whether it is effective.

The game changer focuses on the user and his or her experience. The game changer realizes that in some cases a straightforward translation simply does not work, and that local content creation will be the only way to win the hearts of the users in a new market. In other scenarios a good enough translation may be just the right thing to do. The game changers will build solutions that support dynamic solutions. They realize that “it’s not just about the technology”. They imagine a convergence of apps, tools, technologies and services that empower the best possible multi-way communications with end-users and all actors in the process.

The game changers see it as their mission to empower enterprises to become truly global communicators, not limited to localizing a product, but expanding into the social media, support, knowledge management, the chat and the search. Game changers are innovators. They are thinking out-of-the-box. They are forward looking and outward looking.

The TAUS Innovation Excellence Awards this year were won by NTT DoCoMo, MateCat and Unbabel. There were many in the competition and many more that have not entered the race (yet). My prediction for 2016 is that we will see more game changers, heavier competition between the innovators, disruptive and ‘devastating’ even perhaps (to speak with Paula Shannon at the keynote session of the TAUS Annual Conference.) There will be roadkill for sure, and let’s be honest: yes, jobs are changing and some are disappearing in our industry. But let’s not forget: we are on a mission here to help the world communicate better. No opportunity comes without a cost.

In 2013 we already spoke about the ‘datafication’ of the translation industry when Aiman Copty from Oracle gave his presentation at the TAUS Industry Leaders Forum in Dublin. He spoke about how Oracle has implemented very sophisticated business intelligence into its translation workflow, telling the managers for instance exactly how frequently each single translated string was viewed by Oracle customers. This way Oracle can track - among many other things - the return-on-investment on translation at the most granular level. This year at the TAUS Annual Conference datafication of translation was back as a prominent theme with contributions by Google, Welocalize and PayPal.

We knew already how translation memory data are indispensable for the training of machine translation engines. Now we learn that data are also key to measuring how effective our processes are. The game changer in 2016 is totally data-driven. She or he realizes that everything we have done until now in our industry is mostly based on trust and relationships, on experience and intuition and rarely on facts and data. In pure frustration many localization project managers and translation buyers often expressed their despair by saying: “I have thrown my project over the wall, I hope it will come back, translated and well, but I have no idea what happens and how it’s done.”

All of us in localization will be confronted with data questions and in 2016, more so than ever before. Data has become the fuel of translation. How much translation memory data you have will determine how good your automated translation will be. And the data has to be clean and well-organized by language, domain and content type. And now there is also the data about translation that require your attention. In 2016 we will see dashboards and business intelligence portals popping up everywhere.

The game changer knows that if you don’t measure you don’t know anything. Not so much of a problem perhaps if business is the same every year. But in the world of localization, and in this Convergence Era, everything is changing: the technology, the content, the workflow, the audience and the business model. Where to focus and where to invest: these decisions depend on data. The challenge in 2016 is to break down some walls, to share data and make the translation business transparent and measurable.

TAUS was established in 2005 as a think tank for the global translation industry with a special focus on innovation and automation. The ideas we talked about in those early days are now put into practice. Our members are automating and innovating their translation business. To support the industry in the execution of their strategies, TAUS started developing shared data, metrics and tools, which we refer to as ‘collaborative commons’ or ‘shared services’ that benefit all stakeholders in the industry and the industry as a whole.

With the launch of a new web platform in 2015, we are entering a new phase in the evolution of TAUS as an industry member organization.We refer to this as TAUS 2.0. TAUS 2.0 comprises of the Quality Dashboard, the TAUS Academy and the Data Cloud.

The TAUS Academy is an e-learning platform with training programs in post-editing, quality management and data management and a vast knowledge base containing articles and reports on technologies, best practices and use cases.

The Data Cloud is a repository of industry-shared translation memory data that now contains close to 70 billion words in 2,200 language pairs.

Jaap van der Meer founded TAUS in 2004. He is a language industry pioneer and visionary, who started his first translation company, INK, in The Netherlands in 1980. Jaap is a regular speaker at conferences and author of many articles about technologies, translation and globalization trends.