I have a very clear memory of the moment in 2006 when the proverbial light bulb went off in my head and I first understood the idea that machine translation (MT) could be used in some other way than as a production tool for translators. The bulb was sparked by an article by Jaap van der Meer in the newsletter of the Center for Information-Development Management.

The article introduced the idea that there are multiple places in which MT could be used, in its raw, unedited form, to enable quick access to information or even communication between two people who do not share a language. That type of use is nowadays often called FAUT MT or Fully Automated Useful Translation. Van der Meer’s article introduced the use cases of knowledge base articles being machine translated for customers who would rather read them in another language than English, of company intranets using MT to promote communication across global sites, and of support groups using MT to translate incoming support requests.

I was fascinated, to the point that a few years later when I entered academia, I chose users of FAUT MT as my main research interest and am now pursuing a Ph.D. in the area. However, since academic research takes time and I also wanted to start spreading information on FAUT users, I started a blog for telling the stories of real users of FAUT MT.

Lately I’ve been reflecting on the research literature I’ve read as well as on the things I’ve heard so far from the users I’ve interviewed for the blog.

To me, one of the most interesting questions is what things help to make FAUT MT a workable solution for so many people (500 million users of Google Translate alone). Of course, the most important factor is the linguistic quality of the translation. That is why a large amount of research has been done not only on MT technologies, but also on methods for evaluating the quality of the linguistic output. But as I read and talked to people, I got more and more interested in what other factors in the user experience improve people’s ability to make use of FAUT MT. In other words, what things help people to use MT successfully?

FAUT MT can be broken down into two major areas: MT for assimilation and MT for communication. MT for assimilation refers to situations in which a person machine translates a text that they simply want to understand. They are not going to edit it for others, they are just going to get what they can out of it and use that information for some purpose.

In MT for assimilation, one of the top factors that helps make MT use successful seems to be users’ familiarity with the context and subject of the text they machine translate. This factor was mentioned in the very first study of FAUT MT users, done by Bozena Henisz-Dostert in 1979, and continues to be a factor today. As one of the users featured in my blog put it, “If you understand the context, you can take what the machine translation gives you and connect the dots and bridge the gaps.”

Another thing that is often mentioned as being helpful is some knowledge of the original language of the text. In a survey I did for the first article of my Ph.D., focused on users of an online MT tool, 83% of respondents said they have at least a little understanding of the language they translated documents from (article available here on page 199) . This indicates that people might often be using MT not so much as a full-service replacement for human translation, but as a language tool that helps them fill in gaps for languages they have limited knowledge of. Personally, I find this idea comforting. Even my lowly high school French might be useful to me in some way!

The other large area of FAUT MT use, MT for communication, concerns situations in which people who do not share a language communicate with each other via MT. A somewhat small, but very interesting, body of research has been conducted on these users. Typically, a multilingual group of people is given a task to perform and then asked to hold all communication they need for completing the task via MT, using a chat application with MT embedded in it. This allows the researchers to not only observe and analyze all messaging, but also to concretely test factors that they think might promote successful communication.

In this area, the importance of context is again recognized. Multilingual communicators’ shared understanding, or ‘common ground’, is seen as being a key element of communication, but also challenging when the communicators are from different cultural backgrounds. As Intel’s Will Burgett put it in a 2012 TAUS User Conference: “We’re so focused on just translating, and machine translation doesn’t do anything with culture.” For these reasons, one body of research focuses on how multilingual working groups establish and maintain common ground (example article). The eventual goal of such research would be new tools that facilitate that aspect of communication.

Another factor that has been explored is the visibility of both original and translated messages. In some studies, people communicating via MT could use back translations to see how their own messages were being translated. After they typed in a message in their own language, it was translated into the language of the other participants but also back-translated into their own language so they could get an idea on if the translation was accurate enough or not. If they were not satisfied with the results, they could adapt their message in hopes of a better translation. In at least one study this was shown to improve communication. In other studies (1, 2) users with some competence in the language of the people they were communicating with benefited from seeing the messages in the original language as well as in translation.

Communication consists of more than just language. Likewise, communication via MT depends on more than just the linguistic quality of the translation. New methods for improving the user experience of FAUT MT could improve people’s willingness to use it and open up new ways for companies to support customers in multiple languages. 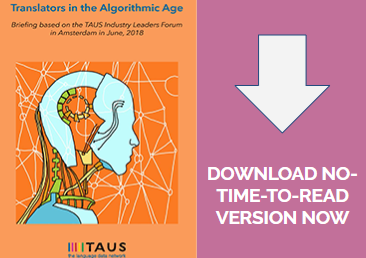 Mary Nurminen is currently a full-time Doctoral Researcher at the University of Tampere in Finland, working on her doctoral thesis which focuses on non-professional, non-translator users of machine translation. She will eventually return to her regular job of teaching translation, writing and interpreting at that same university. Her past life included 13 years at Nokia, working first as a technical writer, then as a manager of technical communications and localization, and 5 years as a Lionbridge solution architect. Mary’s blog on users of FAUT MT is available here: www.mt-stories.com.