“Point of Use” - Translation Out of the Wall Revisited

The concept of "translation out of the wall" was suggested by TAUS Director, Jaap van der Meer, over a decade ago. This idea was visionary because translation (typically a complex process involving higher intellectual skills and the support of a plethora of IT tools and data standards) was compressed into a technical function – a feature of a global infrastructure. Was this a prediction? Or a warning to the industry? Or even a secret action plan?

Well over a decade ago, the concept of “translation out of the wall” (TOOTW) was proposed by TAUS’ founder Jaap Van Der Meer in various presentations to the industry. His aim was to identify the way automatic translation would eventually be as easily available as electric power from the grid. You would simply plug in to an ambient service to translate the language you needed to understand.

What was visionary about this idea was that translation (typically understood as a complex process involving higher intellectual skills and the support of a plethora of IT tools and data standards) was compressed into a technical function – a feature of a global infrastructure (see Nunc est Tempus for more details on features).

TOOTW also suggests that automated translation as a service is needed at a given point of use, just as you charge an electrical device by plugging into the nearest socket.

Was this a prediction? Or a warning to the industry? Or even a secret action plan?

Our standard machine translation narrative has been largely forged by “big translation”. Complex software was invented in the 1960s to help large firms or organizations bulk-translate certain types of content into the few languages that have been suitably digitized into transfer-rule software. In the 1990s, the realization that translation memories afforded a source for new statistical methods of translation shifted the focus towards data as the power source for translation futures.

At the same time, a few big internet companies such as Google, Baidu, Yandex and Microsoft managed to provide consumer translation solutions, while larger translation companies began to experiment cautiously with inhouse domain-trained MT systems. Most of the industry’s shoptalk thenceforth revolved around the relative value of humans and machines in delivering professional translations. Post-editing, parity propaganda, and all that jazz. Although TOOTW remained a conference watchword, the consumer point of use of translation has not been on the industry’s radar.

Today, we are beginning to see the initial glimmer of translation as a service that targets people doing things in places, rather than simply reading content globally. There has been a small flow of translation solutions for smartphones, and the first innovations in earbuds fitted with a translation feature, enabling travelers and the like to communicate in situ to alt-language speakers.

Meanwhile, automatic spoken translation solutions for (online) meetings are still under development, although some of the associated tooling is starting to go live. Tokyo’s 2020 Olympics should offer the next live testbed for such local services. There are also attempts to offer human interpretation over smart phone apps. All these solutions offer translation “at the edge” – at the dynamic point of use of language in private, social and professional contexts for people who today are by definition “connected”. Instead of the Internet of Things, call this the Internet of People…

The massive rise in digital voice content in general has been widely noted. In due course, voice streams of all kinds will offer a valuable source of data for any ML developer intent of designing an automated spoken translation service fed to wearables – the “point of use” par excellence. So translation may indeed be about to come out of the wall, as Jaap predicted.

So how could this impact the translation industry as we know it?

To embrace and benefit from this new catchment area for translation, we shall need to move way beyond the standard 100-language threshold of the world’s most “populous” tongues. The focus must be on collecting and processing data at a whole new level of linguistic detail: dialects, emotional registers, gendered usages, auditory rhetorical tricks and conversational gambits. In other words, on the musical dimensions of language behavior afforded by the human voice. In standard text, such nuances are typically expressed through vocabulary or syntax. This shift in media from sight to sound will entail a wide-ranging rethink of the resource economy.

For example, we’ll need to build a “market” for very wide-ranging speech data, and at the same time inspire the research community to build an AI framework for processing “contexts of speech use” so that algorithms can successfully negotiate the millions of variables inherent in spoken language processing. This might sound like an impossible task, yet the accelerating returns on current global AI investments suggest that human ingenuity will be able to work with machines to achieve what we need.

Already there is rapid growth in transcription technology, using speech recognition to automatically capture language from videos, radio, and other recorded sources. This closely apes the standard translation set-up of automation aided by humans. Extending this kind of technology to hundreds of languages and discourse types could form a useful basis for training TOOTW apps.

On the data front, there are currently very few dedicated suppliers of very large-scale language data to either the translation community or the speech tech community, beyond what is available from some phone companies and contact centers. And there appear to be only anecdotal data (usually from techie reviews) available publicly on how current TOOTW apps (phone translators, etc.) behave at actual points of use.

This agenda item, therefore, could open up new opportunities for innovative players to investigate, collect, process and share speech translation-in-use data with system developers and the industry as a whole. Blockchain could offer a secure, enabling data sharing solution for this community in certain cases. The ultimate litmus test for TOOTW would then be this: a couple speaking two different languages meets online using a permanent earbud translation service and lives happily ever after in bilingual heaven.

Dream on, you say! I would argue that that original TOOTW idea was neither a pipedream for extreme techies in the industry, nor a doomsday warning to the world’s language-lovers. It was an example among others in our industry of “listening to the technology” and anticipating change. Certainly not translation “off the wall”!

To hear more on this topic and ask your questions why not join us at the TAUS Back to the Future webinar on September 6, 2018 at 5pm CET. 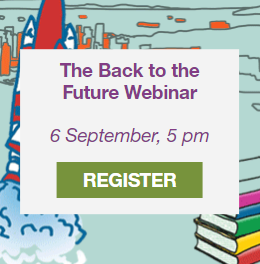